Chromebooks and iPads are in the house! (or classrooms :))

The school received a generous donation of $25,000 from an anonymous donor (may God reward you!).  This donation had only one requirement - it had to be used on new technology for the students of St. Philip.  With this donation in hand, the school purchased 64 brand new Chromebooks and 30 iPad Minis, along with the appropriate charging carts.  This past Monday evening, a group of teachers and volunteers proceeded to activate all the Chromebooks for use on our wireless network.  On Tuesday, the teachers started to use the new Chromebooks in their classrooms.

The initial results have been phenomenal.  A new excitement level was noted by the teachers and students who used the Chromebooks in their classrooms.  It was truly radiant to see the teacher's excitement in receiving new tools to reach their students.  Next week, the iPads should be available for use as well.

After several YEARS of planning and hard work by the technology committee and volunteers, we have achieved a major milestone!

Below are some pictures from Monday night and Tuesday.  And yes, that is my son lending a hand as well! 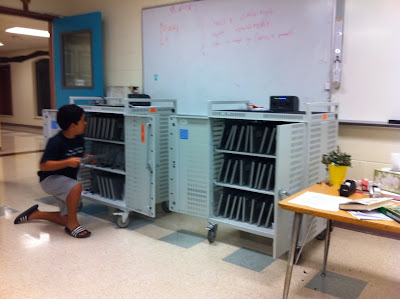 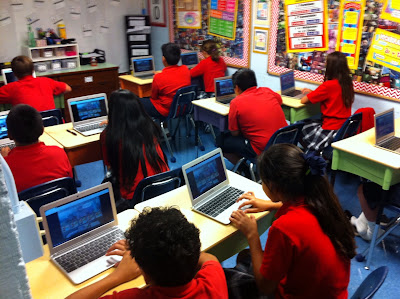 Our new wireless network had its first "scale" test and...

Last week, the school held a workshop located in Holy Angel Hall.  Other teachers/members from surrounding schools were also in attendance.

When we were designing the wireless network, we designed it to accommodate up to 100 devices in each classroom and up to 400 devices in Holy Angel Hall.  This seems like an excessive amount but as newer mobile/computing devices are mostly wireless, we felt it wise to plan for more wireless devices as Wi-Fi is becoming the de-facto standard for network connectivity (for now at least).

When the workshop was occurring, we monitored the entire wireless system.  The wireless system had approximately 65 devices total with 60 of them just in Holy Angel Hall.

Our wireless system is quite sophisticated in that we're able to determine what type of wireless devices were operating, with the predominate device being, not surprising, the iPad.  Other devices appearing were iPhones, Android devices, Windows and Mac computers - full spectrum of devices.

As teachers and students want to introduce technology into the classroom, the St. Phillip computing infrastructure is now officially ready.

New projectors for the school!

Well, this past Saturday, we had an amazing event occur.

With the leadership of Eric Muntz, a technology committee member and school parent, the installation of 19 brand new projectors and speakers was performed!

Over the course of several months and with the support of the technology committee, Eric had the formable task of managing the entire project of updating the audio and video systems in the classrooms which included designing, testing and implementation!  Whoa!  Big shoes to fill and he did so admirably!   Thank you Eric!

Was it perfect?  By all means no...we had issues with wall material, drills and screws.  But, all of us pulled together to get through these bumps and did so with flying colors!

A HUGE thanks to all the volunteers!  We know you all worked hard (all day!) and we greatly appreciate it!  And, of course, a MASSIVE thank you to Eric for managing all this!

And, finally, all of this effort would not have been possible without the GENEROUS donation of the projectors and speakers by the John and Dorothy Shea Foundation.

St. Philip's teachers, children and parents greatly appreciate all of the people involved in this effort.

"Whoever is generous to the poor lends to the Lord, and he will repay him for his deed."
Proverbs 19:17

It has been awhile!

Well...first and foremost, let me apologize   It's been MONTHS since I posted any status on our tech blog.  Boo!  I'm hoping you will forgive me as I'm now going to provide you some updates on the amazing things that the tech committee has been working on!

Without further hesitation, here is what we've been working on...

The Technology Committee continues to work hard for the parish, school and the children of St. Philip the Apostle!

The Technology Committee also wants to thank all of YOU for your continued support!!!  God bless all of you!

Have a great and safe summer!